Immersive Telepresence video conferencing allows you to feel as if the person you are talking to is actually standing in front of you.

Tele = operating at a long distance

Presence = being present in a place

This type of video conferencing has a need to include as much features as possible to arouse action in an organ tissue to make you feel as if you are actually at the location you are connected to.

To have this feature, nothing but the BEST video conferencing equipment has to be available and improved tranfering of audio and video has to be involved.

However, it takes more than just the best video and audio equipment. It takes enhanced accuracy of sight and sound.

The features of Immersive Telepresence

This type of conferencing also involves an improved sense of vision. This usually includes the entire background view of the participants.

It may also involved a Wrap Around screen or a screen that is large enough to make you feel like you are in its world. 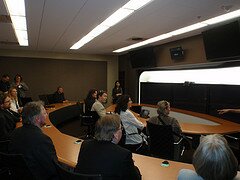 The sound that this form of communication uses has to have very high accuracy with very minimal distortion in the sound. The sound will usually be stereophonic. This transmits sound from two sources through two channels.

Now, if you go out and buy the best webcam on the market, along with the best microphone money can buy as well as a high-end computer / laptop with a network with a large bandwidth you probably still wouldn't get the best Immersive Telepresence experience you can have.


There are differences with each aspect of video conferencing:

Benefits and Disadvantages of Immersive Telepresence

As with anything else, telepresence has its benefits and disadvantages. This page already explains the benefits. However, some of the main advantages (in a nutshell) are as follows:

There have been talks on the improvement of immersive telepresence video conferencing. As technology increases, people develop ideas. In the future we can expect:

The only risk of telepresence that is seen today is a very low return on investment. It costs a considerable amount of money to operate a telepresence session.

However, the amount of people taking advantage of it are fewer than expected. Meetings are still conducted in person more often than not. It may take years for people to do more business via video conferencing.

Meetings have been conducted in person for years. It may take time for the business world to adapt to change.