Before telepresence, videophones and multipoint was made popular, online web conferencing was used by most people. As the internet grew more popular in the 90's, web conferencing, webinar hosting services and webinar software programs were being widely used by colleges and universities.

Especially by the millions of students world wide.

Online web conferencing resources have been used and depended upon for years until most recently.

However people still depend on it for day to day communication with friends, family and business partners.

Web conferencing is when you interact over the web in a way that lets you show others in another location what's on your screen. Some web-based meetings are also known as webinars, or online seminars.

You are also collaborating with them in the process. 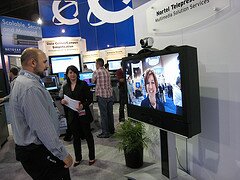 It lets you conduct (or see) events from most computers. Events such as trainings, meetings, classroom sessions, presentations, or lectures can be given or seen by individuals or groups.

See also Hosting a Webinar for more details and tips.


While attending Indiana State University, I got my first experience with this. It was a classroom setting with at least 20 to 25 students present.

The professor told us to put a username and password in a program. He then gave us a few instructions. In a matter of seconds I saw my mouse pointer move on the screen by itself. 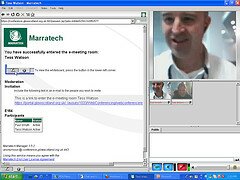 The instructor was telling us where the pointer was going on our screen. It was then I realized that he was controlling our screen from his computer monitor. Web conferencing is sometimes (or most commonly) used in an informal setting.

For example, classrooms, offices, homes, etc. It is hardly ever used in arena settings like conventions or regionals (for obvious reasons). That is not to say that it cannot be useful.

Since you or most of the population won't invest the funds to conduct a full fledged, company wide telepresence meeting, web conferencing from your desktop, laptop or iPod would be acceptable for now.